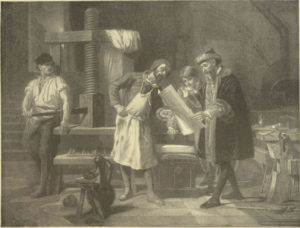 In a world fixated by online and screen based activities it is refreshing to remember just how revolutionary and dangerous the good old fashioned book was … and still can be !

When Johannes Gutenberg (actually his full name was Johannes Gensfleisch zur Laden zum Gutenberg) created the world’s first ever printing press it was every bit as momentous as the introduction of the Internet and social media … probably more so in relative terms.

Previously, if you wanted a copy of a book, it was literally that: “a copy”. That meant somebody (sometimes many people working together) had to transpose the entire book by hand to create “a copy” for you. 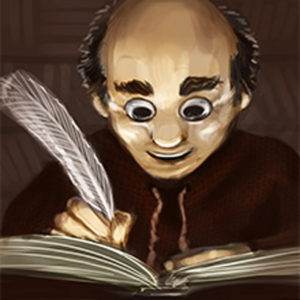 Scribes (just like Dedicatus in Perpetua) were very skilled craftsmen, laboriously creating new books almost exclusively for the Church, royalty, and rich nobility. That is not surprising given the effort and cost involved, for instance, just imagine how long it would take to copy out the entire Bible by hand.

This made books incredibly expensive and rare. As a result only a tiny proportion of the population actually read anything. In terms of history, or indeed entertainment, most relied on generally itinerant story tellers or players to amuse and inform them in their rare moments of recreation.

One consequence of that was the masses were not able to know what was going on the world, leave alone able to properly engage with new ideas or other peoples.

Well the printing press changed all of that. This chart (by Tentotwo) shows just how the circulation of books exploded as a result (note it is a logarithmic scale). Over a relatively short period of time in human history books became available to all; alongside and resulting from which there was a flowering of knowledge and education amongst the general population.

One of the profound values of books is that they can transmit ideas from one person to another. They also allow people to share their experiences, and thoughts, and feelings. These are powerful forces !

Not least concepts of freedom, democracy, and equality were spread by ordinary people reading books. The result is there for all to see in modern, civilised society.

But sometimes in human history there are those who do not want the general population to think for themselves, or get ideas from others. They then try to ban books that they don’t like – they generally don’t like books that disagree with them or might give the general population ideas that would cause them to oppose their leaders. Many times in history dictators and others have set about systematically destroying books. Books and ideas are always precious and never entirely safe from those that want us to blindly follow them.

Even in Litrasaurus’ magical land of Perpetua, Extinctus realises that knowledge is power so wants all the books burned. Then poor old Kindler so wants to please Extinctus he just goes along with it, not least because he just loves bonfires, not really understanding what he is doing. Meanwhile Litrasaurus and his friends are busy trying to save the books and store them safely hidden away in the secret library deep within the Cave. Anyway if you want, you can read more about all that HERE.

Not everything, though, is in books and stories – a lot can be learned from experiencing and doing things together. Which is why amongst the books that Litrasaurus recommends are these two:

“The Dangerous Book for Boys” & “The Daring Book for Girls”

Now, they do contain stories (good old fashioned yarns in fact, as well some great history) but mostly they focus on activities – no, not on your phone or laptop but out there in the real, outside world.

These books are simply full of things to do that children will find amazing and will develop their creativity and capability. Whilst there are many great things that phones and tablets can do it is also really important to spend time away from them doing other things as well. 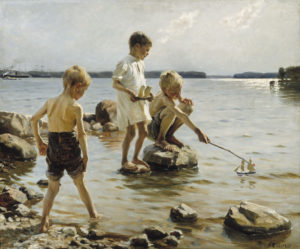 Reading and writing and sharing stories is obviously a great thing to do that Litrasaurus would recommend, but as well as that these books have many, many more wonderful things that children can do, many of them together with their parents.

These two books are a bit of a special exception because generally Litrasaurus recommends classic children’s stories – you can find the full list HERE.

Now, also, the thing about the magical land of Perpetua with all its characters is that it is there to encourage children’s imagination and creativity. Sometimes children don’t know what to write about, which is why we created Perpetua so that there is a basis which they can take and expand upon. 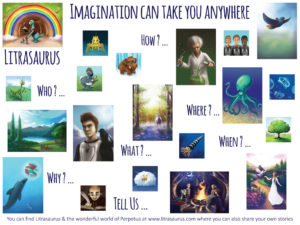 If you or your children want to why don’t you read about Perpetua and then make up and submit a story about what you think happens. There are even a few questions HERE to stimulate the process if needed or wanted.

The whole point of Litrasaurus is that we appreciate the value of stories, not just in terms of developing children’s creativity and imagination, but also in terms of a life skill and mechanism for sharing ideas, generating empathy with others, and so much more, all of which can help make the world a better place.