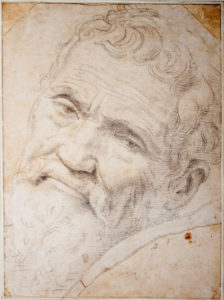 One of the most talented artists and crafstmen alongside Leonardo seen as the archetypal and ultimate Renaissance man.

Imagination and creativity were at the heart of what he did, and his works live on after him continuing to inspire countless generations.

His artwork and sculpture are world renowned.

One of the most famous is the fresco on the roof of the Sistine Chapel in the Vatican. 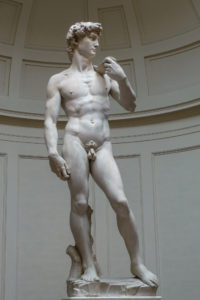 Another of his masterpieces is the statue of David now in the Galleria dell’Accademia, Florence.   His imagination was an essential element of his art.  Michelangelo himself, of course, put it much better “I saw the angel in the marble and carved until I set him free”.  Interestingly the marble block from which he carved David had already been part carved by first Agostino di Duccio then Antonio Rossellino who both gave up for whatever reason.

He was though a polymath, amongst other things ending up as the architect of St Peter’s Basilica in Rome at the centre of the Vatican which included redesigning the dome.

He was also a poet of some distinction.

It is with fire that blacksmiths iron subdue
Unto fair form, the image of their thought:
Nor without fire hath any artist wrought
Gold to its utmost purity of hue.
Nay, nor the unmatched phoenix lives anew,
Unless she burn: if then I am distraught
By fire, I may to better life be brought
Like those whom death restores nor years undo.
The fire whereof I speak, is my great cheer;
Such power it hath to renovate and raise
Me who was almost numbered with the dead;
And since by nature fire doth find its sphere
Soaring aloft, and I am all ablaze,
Heavenward with it my flight must needs be sped.

Another, rather amusing, example of his artistry is this shopping list !  His servant was apparently illiterate and so Michelangelo just drew what it was he required alongside the words. 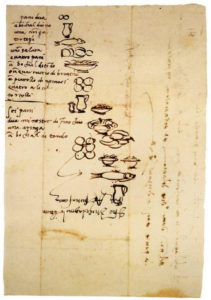 The supreme quality of his artistry and craftsmanship as well as his imagination and creativity have been, and continue to be, inspirations for many people.  To take just one example there is now a Michelangelo Foundation which celebrates and preserves master craftsmanship (including Eleven Criteria For Excellence) and strengthens its connection to the world of design.

It is a wonderful thing that imagination and creativity, not least when combined with such artistry and craftsmanship, can live on for so many generations.