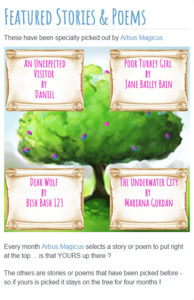 Litrasaurus is a privately funded charitable endeavour whose aim is to encourage and develop imagination and creativity in the young, and young at heart, by the reading, writing, and sharing of stories and poems.

The Litrasaurus website www.Litrasaurus.com provides a place where children, and adults if they want, can upload and share their stories and poems.  Our contributors range from children, obviously, to parents, grandparents, and teachers, as well as a range of Guest Authors, including Frank Cottrell-Boyce who has kindly allowed us to feature one of his stories “Shona”.

The site has been carefully designed to be a safe space for children to share their stories and poems.  As such we insist that they use a pen-name rather than their own names (you can also submit anonymously if you want).

We are also entirely un-judgemental.  Not least we do not correct for grammar and spelling because we want to focus on the imagination and creativity, whereas having to worry about grammar or spelling inhibits children from writing a story or poem, which is not what we want.  We do, of course, moderate for appropriate content and language though !

We also do not have any system of ‘likes’ or other measure (such as counting the number of shares) because we are also very aware that sometimes that too can inhibit children, or worse still if, having written something, they are knocked back by achieving fewer likes or shares that others. 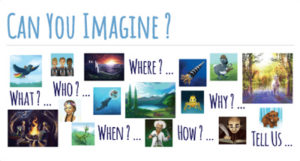 The whole point of Litrasaurus is to encourage children to use their imagination and creativity to write.

One of the ways that we do encourage children is by featuring a different story every month.  Arbus Magicus, that wise old tree that stands in Perpetua, chooses one  poem or story every month to go to the top of the tree on the homepage.  There are four stories or poems on the tree at any one time, so once selected yours actually stays for four months, moving down the tree as other stories are selected. 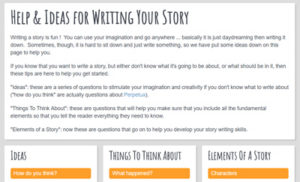 For instance last year we had a series of prize draws where we picked, at random, one story or poem out of those that had been submitted and then arranged for our brilliant illustrator, Daniel, to create an image for it.

This year we will be arranging similar competitions where you can win book tokens … more of that later in the year !

There is also a range of help and ideas on the site.  Not least Perpetua, which is the magical world where Litrasaurus lives.  What we have done is create a whole variety of characters and situations so that, if children want to (or need a little inspiration in terms of what they could write about) they can just select one of these to write about – as part of that there are list of questions about Perpetua to get them thinking.

Best of all of Litrasaurus is entirely free to use !