Stories don’t just surround us they are inside us 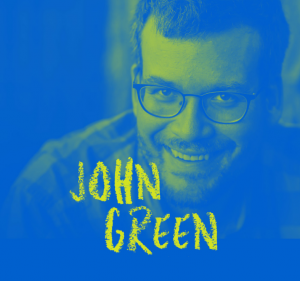 “Whenever I’m asked what advice I have for young writers, I always say that the first thing is to read, and to read a lot. The second thing is to write. And the third thing, which I think is absolutely vital, is to tell stories and listen closely to the stories you’re being told.”

That is just such great advice !

It was written by John Green who has had a highly successful writing career not least as award winning author of young adult novels. He is also a renowned vlogger and was, in 2014, named by Time magazine as one of The 100 Most Influential People in the World.

Many young children (and nearly as many parents) aspire to write, and it is clear that the more you read the better your writing is likely to be.

Even if it is not a book as such, or even stories, in reality the young generation are constantly writing, but nowadays it is mostly on social media. That is absolutely not to say that the quality of their writing is not important (e.g. note the rhetorical double negative for effect). The art of writing, and particularly persuasion, are even more important in these new, condensed, mass media formats.

The ability to use the language well has always been a key differentiator in society – and it still is.

There is a great quote (attributed variously to Pascal and Mark Twain) to the effect: “I’m sorry I wrote you such a long letter but I didn’t have time to write you a short one”.

The point being that brevity in writing is an art that needs practice. Surely all young people should value developing that art, if only for social media ?

Whilst technology and media has changed beyond all recognition, human beings have not. Stories have formed a vital, and integral, part of human society, and development, since time immemorial. Not just the abilities to engage, or to empathise, or to convince but simply the ability to express oneself is an essential element of fulfilment.

Stories are, literally, at the heart of that – we all have so many stories inside us ! 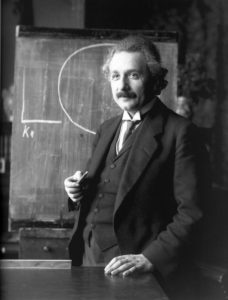 To be able to express them we need to develop story telling and writing as a skill, or probably more as an art. As Green rightly says one can learn so much from listening to and reading other people’s stories (and in doing so you will also be achieving so much else like learning, developing your imagination and creativity as well as developing empathy). However, as Albert Einstein once said “There comes a point in your life when you need to stop reading other people’s books and write your own” and that goes for stories too.

Litrasaurus was set up for the young, and young at heart, to read and share stories in a way that is open and not judgemental. Now, we all know how sensitive it can be to expose our creative work to others and risk criticism or ridicule, so on Litrasaurus there are no ‘likes’ or ‘comments’ or any other such mechanisms that can all too easily become competitive or tyrannical or hurtful. 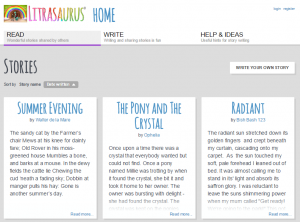 What’s more everybody gets to pick a username which can be whatever you like (think of it as a pen name just like Mark Twain), and you can even post your stories anonymously if you want. On Litrasaurus your story is just there … people can read it for what it is, just as you can read theirs … an open platform to read, write and share stories, as simple as that.

When it comes to sharing them, if you do want to, Litrasaurus would be really delighted to post your or your children’s stories for you – just click on the button below and follow the instructions.